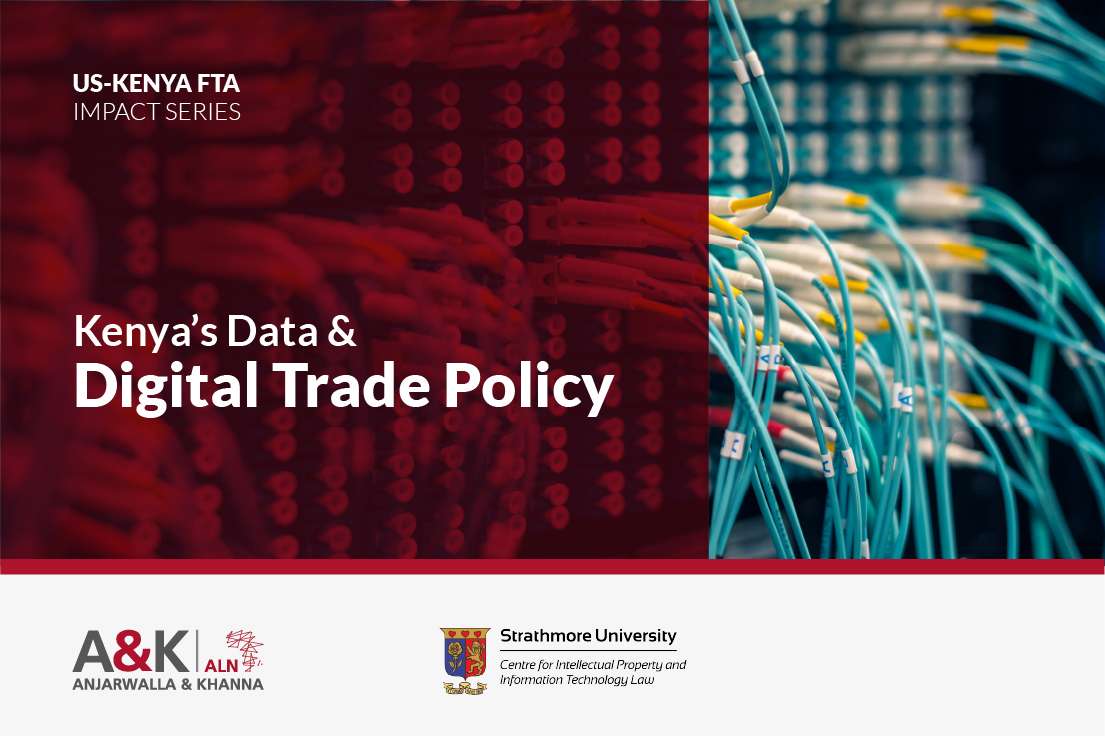 In July 2020, Kenya and the United States (US) announced their intention to conclude a Free Trade Agreement (FTA). Since then, there has been considerable speculation as to whether this would be a mutually beneficial arrangement.

While many actors see the FTA as a significant leap in the bilateral relations between the countries and as an important step towards increased foreign direct investment into Kenya, various commentators have feared that the FTA might result in an unfavourable outcome for Kenya. In our previous article in this FTA series, we generally discussed the preliminaries leading up to the FTA. In this second instalment, we discuss the FTA’s potential impact on data and digital trade in Kenya.

While we can expect continued healthy debate on the pros and cons of any FTA, it is clear that this proposed agreement would have an important impact on Kenya’s data and digital trade policy. In fact, the FTA would have a tangible impact on Kenya’s recent digital trade and data policies relating to localisation of data, taxation of digital products and incentivisation of local innovation.

Kenyans rely on technology for, among other things, trade. This has been accelerated by the COVID-19 pandemic. Citing local innovations such as M-Pesa, Mdundo and Masoko as evidence of the urgent need to capitalise on the digital economy, the Ministry of ICT, Innovation and Youth Affairs recently released two crucial policy documents: the Digital Economy Blueprint in 2019 (“the Blueprint) and the Draft Digital Economy Strategy in 2020 (“the Strategy”).

According to these documents, by the end of 2018, the number of active internet subscriptions in the country was approximately 45 million, and the value of the Information Communication Technology (ICT) sector stood at KES 390.2 billion. Kenya’s Vision 2030 provides that the ICT sector ought to contribute 10% to the Gross Domestic Product (GDP).

The Blueprint and Strategy detail the policy and legal frameworks that have been, or are currently being put in place to ensure the achievement of the Vision 2030 target. These include the Data Protection Act (DPA) enacted in 2019, the National ICT Policy of the same year, and the recent changes to tax laws, introducing a Digital Services Tax (DST) and Value Added Tax (VAT) on digital products.

In establishing these frameworks, the country has made careful policy decisions, informed by its unique vision for the digital economy. An FTA between the US and Kenya would impact some of these decisions as further discussed below.

Over the past decade, the world has become increasingly “privacy” conscious. After Edward Snowden’s revelations regarding the National Security Agency’s surveillance, a number of countries took measures to safeguard the privacy of their citizens.

The reach of Big Tech has contributed to this trend significantly. Of the national and regional efforts, the most notable appears to be the European Union’s (EU) General Data Protection Regulation (GDPR) given its extraterritorial application and robust protections.

It is therefore unsurprising that, in 2019, following an election marred with allegations of data breaches, Kenya enacted the Data Protection Act (“the Act”) which borrowed heavily from the GDPR. In this Act, the transfer of Kenyans’ personal data abroad is restricted. Those seeking to transfer such data would have to satisfy the Data Protection Commissioner (DPC) that the recipient jurisdiction offers adequate protection, with certain exceptions.

Data is crucial for trade. From targeted marketing, to product diagnostics, businesses can extract immense value from data. This economic incentive appears to contribute to the attitude that Kenya has adopted towards data.

The ICT Policy provides that one of the country’s main aims is to ‘store’ and ‘use’ its own data. Basically, Kenya would like to exercise “data sovereignty” – a phrase specifically used in the Strategy. Data sovereignty refers to a country exercising control over its citizens’ personal data, monetising it and safeguarding it from breaches.

The insertion of data sovereignty as an aim in both the ICT Policy and Strategy, along with the provisions in the DPA, has predisposed the country to localisation. However, there are clear contradictions in the country’s pursuit of this aim. On the one hand, all the policy documents allude to nurturing infrastructure such as data centres so as to incentivise localisation of data, and on the other, they refer to Kenya integrating with the wider global economy through trade. These are positions that would need to be reconciled, as a global economy would rely on free flow of data.

An FTA with the US could further muddy the waters. In fact, the US’s negotiating objectives provide that the US Trade Representative (USTR) would be pursuing minimal barriers to the cross-border transfer of data.

In both the Trans-Pacific Partnership Agreement (TPP) and the US-Mexico-Canada Agreement (USMCA), the digital trade chapters have provisions prohibiting unnecessary limits on the flow of data in e-commerce. While the US does recognise the importance of data protection in such arrangements (as often stated in the FTAs they conclude), it is prudent to note that, at a federal level, it does not have data protection legislation.

Therefore, it remains to be seen if, absent an FTA, transfers to the US would satisfy the DPA’s requirements. Concluding an FTA with a digital trade chapter could amount to exempting the US from compliance with the DPA and altering the country’s policy of incentivising the use of local data centres. It would appear that the Ministry of ICT is already laying the groundwork for this with the recently proposed Data Protection (General) Regulations which contain a carve-out for trade in the provisions restricting cross-border data transfers.

In keeping with the pro-Kenya policy, both the Strategy and Blueprint make mention of the need to promote local innovation. In order to achieve this, the government hopes to facilitate education in ICT, support local incubators, provide subsidies and waivers for local start-ups, and establish infrastructure that would give these businesses a competitive advantage.

As it stands, a large number of businesses in Kenya’s digital economy aren’t Kenyan - Uber, Google, and Glovo for example, are all foreign. The Strategy, in particular, identifies this as something that needs to change. The government aims to entrench a local digital marketplace that is serviced by local start-ups.

While foreign businesses would not be barred from operating in Kenya, there would be preferential treatment, privileging local start-ups. This preferential treatment of locally owned businesses in the ICT sector is also seen in the ICT policy which requires that Kenyans hold a minimum 30% equity stake in licensed ICT service providers. Further, the recent introduction of the Start-up Bill, 2020, points to the efforts to institutionalise incentives for local start-ups.

The very businesses that often have a competitive advantage in the country —Uber, Airbnb, Google, and Microsoft — originate from the US. Therefore, it is certain that in any FTA, the US would seek to ensure that these businesses are not disadvantaged.

The USTR, in its negotiations, will likely seek to include a complete prohibition on tariffs on digitally transmitted products, and on any general discriminatory treatment, such as requiring the establishment of local operations, or a certain quantum of local ownership. This has been the trend in previous agreements.

Aside from contradicting general policy, agreeing to an FTA with such provisions would run counter to the purpose of the recent changes to the Income Tax Act and VAT Act introducing, respectively, the DST and VAT on digital products and services.

While these taxes are to apply indiscriminately across the board and could possibly negatively impact local start-ups which are smaller than their foreign counterparts, the incentives in the Start-up Bill are meant to allay some of these concerns. Exempting US Big Tech from this tax by classifying it as a barrier to trade, would however render the start-up incentives, which are intended to level the playing field, obsolete.

We also need to consider how a Kenya-US FTA might impact the continent’s digital trade policy, and in particular the ambitions under the Africa Continental FTA (AfCFTA). While the digital economy was not expressly identified as an area of focus in the AfCFTA, this is quickly changing. The Trade Law Center (TRALAC), in 2019, noted that Africa’s capacity and infrastructure for the digital economy was lagging behind the world average with only about 40% of individuals having access to stable internet connections.

Following the publication of a Digital Transformation Strategy for Africa by the African Union (AU) Commission, the digital economy will feature in the second phase of negotiations in early 2021. In the AU’s Strategy, it is clear that the continent wants to prioritise market integration, i.e., an African Digital Single Market. As such, various policy commitments are made such as building local capacity, and ensuring sufficient infrastructure.

In many ways, Kenya’s internal policies pursue the same ends as the AU. In fact, Kenya commits to promoting the localisation of data, and the promotion of local entrepreneurship, as the AU does for Africa. However, while the AU’s approach is to implement these aims at a regional level, Kenya is very focused on first doing so at a national level. While this is not necessarily the case, commentators might see these two approaches as incompatible.

In entering into an FTA with the US, Kenya would be well-served by considering how its internal policies, might impact regional attempts to coordinate the digital economy. This is especially the case considering the fact that the USTR has openly stated that the US-Kenya FTA would serve as a template for other FTAs in sub-Saharan Africa.