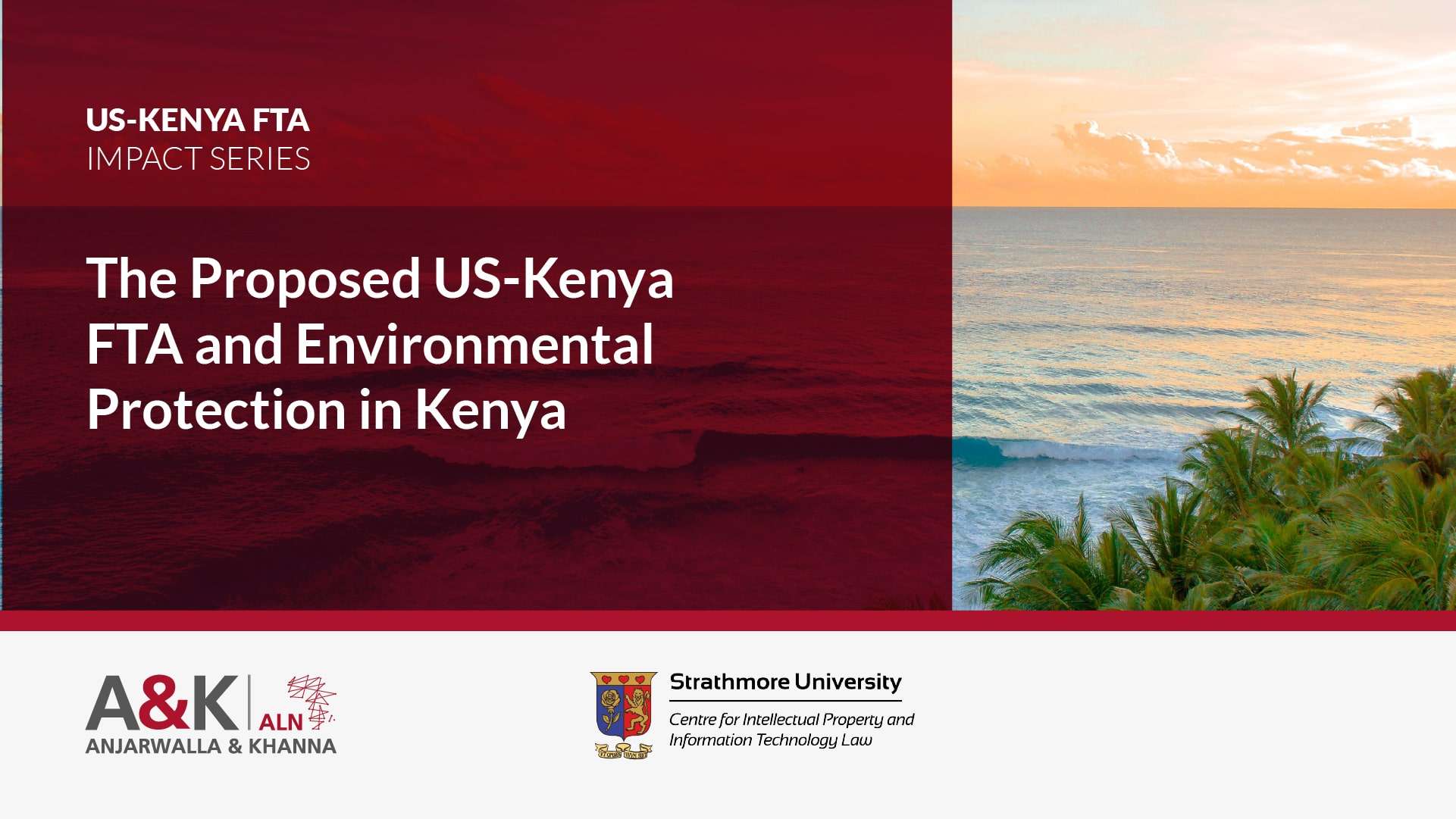 The Proposed US-Kenya FTA and Environmental Protection in Kenya

In this series we have considered various facets of the upcoming US-Kenya Free Trade Agreement (FTA). Perhaps a lesser-known area that may sometimes escape scrutiny, is environmental protection. FTAs with the US generally feature provisions relating to environmental protection. A brief glance at both Kenya’s and the US’s negotiating objectives prove that the US-Kenya FTA will be no exception.

This instalment of the series seeks to establish the potential impact of the FTA on Kenya’s environmental protection efforts. In order to do this, we review the environmental impact that the US’s recent FTAs have had on their recipient member states; the US’s and Kenya’s negotiating objectives; and the local and international legal environmental framework.

The devil is in the details: environmental provisions in FTAs

The inclusion of environmental provisions in the FTAs negotiated by the US can be traced back to the North American Free Trade Agreement of 1994 (NAFTA). NAFTA provided for a list of multilateral environmental agreements whose provisions would generally supersede NAFTA’s in the event of a conflict of obligations.

During the commencement of NAFTA negotiation rounds in 1991, environmentalists were concerned about the negative environmental impact that the agreement could have on the US as environmental protection in Mexico lagged behind that of the US. They feared that NAFTA would lead to a reduction in the US’s environmental standards in an effort to remain competitive against imports from Mexico. Furthermore, they were also wary that NAFTA might worsen Mexico’s already-threatened environment.

In order to alleviate these concerns, the negotiators pioneered the inclusion of environmental provisions in FTAs. They incorporated far more provisions addressing environmental concerns than ever before, making the agreement the “greenest” in US history.

For example, NAFTA’s preamble specifically recognised the need for environmental protection and conservation and the promotion of sustainable development. It also called for strengthening development and the enforcement of environmental laws and regulations. Moreover, NAFTA included a chapter on sanitary and phytosanitary measures, which allowed the parties to impose more stringent health and safety standards than those in other international agreements. Its chapter on technical barriers to trade specifically allowed the parties to choose “the levels of protection considered appropriate” for that country and provided that certain specified multilateral environmental agreements (MEAs) take precedence over NAFTA’s trade liberalizing rules.

In spite of this, NAFTA’s Chapter 11 undid most of the gains the agreement made in relation to environmental protection as it contained a clause which gave a “right of action to a foreign investor against the government of the country in which it invested, for a broad range of actions taken” by the government.

This right of action that was subsequently included in later FTAs, lacked a proper mechanism to guard against claims brought against countries for passing legislation to protect the environment. For example, the US in the first NAFTA case in 1997 challenged the Canadian government’s environmental regulation of gasoline additive Methylcyclopentadienyl Manganese Tricarbonyl (MMT). The US won.

According to some, this right of action in Chapter 11 was – in some cases – implemented in a manner that restricted the ability of states to manage their environment. Without a mechanism to evaluate the merits of claims brought under this right, there are instances, such as the US-Canada case over the regulation of MMT, where legislation and regulation may be the subject of a claim by an investor. In this way, the right of action may serve to inhibit a government’s actions.

Consequently, many modern FTAs include obligations to prevent the lowering of environmental standards, bestow the right to regulate for the benefit of the environment, and codify a commitment to implement multilateral environmental agreements. However, the threat of legal sanction to a government over a breach of the “right of action of an investor” acts as a strong deterrent.

The US has been elaborate in their objectives, seeking to advance a number of positions. For example, the US would be keen on ensuring that Kenya establishes effective enforcement of environmental protection laws, in order to protect trade and investment between the parties. The US has stated that it requires Kenya’s commitment to combat illegal, unreported and unregulated fishing, and protect fisheries and other oceanic flora and fauna. Further, it seeks to include provisions to mitigate the discharge of solid waste into the marine environment.

The US further states that it seeks to establish strong and enforceable environmental protection obligations subject to disputes settlement mechanisms applied to other provisions within the FTA—mechanisms which are yet to be established. It appears that the US seeks to negotiate an environmentally-conscious FTA.

What to expect: USMCA & TPP provisions

Nonetheless, to have an experiential idea of what Kenya should expect from the FTA, we look at the USMCA and TPPA and consider provisions in the two documents.

In both these documents, much like NAFTA, there are objectives that call on the parties to promote mutually supportive trade and environmental policies. These are geared towards ensuring high levels of environmental protection and effective enforcement of environmental laws, including MEAs. Parties are encouraged to enhance their capacities in order to address trade-related environmental issues. Furthermore, both require the recognition of public participation in law and policy development, and they obligate the parties to make publicly available information on programmes and activities, including cooperative programmes between the parties on protection of the o-zone layer.

As regards Mexico and the US, the USMCA provides that US investors in Mexico and Mexican investors in the US will only have access to investment arbitration under restrictive circumstances; unlike that provided for under the NAFTA regime. They will not be permitted to bring claims in relation to an indirect expropriation or unfair or inequitable treatment—by far the most common types of claims alleged by investors in investor state arbitration. Instead, they will be able to bring claims only for alleged breaches of the national treatment standard, the most-favoured nation (MFN) treatment standard and/or the protection against direct expropriation without compensation.

Canadian investors in Mexico and Mexican investors in Canada can still access investment arbitration through the Comprehensive and Progressive Trans-Pacific Partnership (CPTPP), which entered into force in December 2018.

The restrictions that the new regime imposes on investor claims and investor-state arbitration, if replicated in general FTA practice, could be beneficial to environmental protection. Furthermore, recourse to national courts at the first instance for investor-state disputes is more likely to affirm a country’s environmental policy and legislation.

Possible effects of the US-Kenya FTA on environmental protection

Kenya has a strong environmental protection framework in place. It is crucial that our negotiating objectives and the resulting FTA strengthen these various legal frameworks, regulatory bodies and policies. The progress made in advancing environmental protections should be guarded jealously. This is especially in light of reports that there is a push to weaken Kenya’s existing rules on single use plastics by certain stakeholder groups, such as the American Chemistry Council.

In 2017, Kenya banned all single use plastic such as water bottles and straws that would often end up in waste landfills, marine parks, and other protected areas. The ban has facilitated the adoption of further environmental protection measures including the use of biodegradable material in place of plastics. In a country where an estimated 100 million plastic bags were handed out at grocery stores and supermarkets previously, the ban has been a significant step toward environmental protection.

There has been speculation that American Chemistry Council seeks to have the ban reversed or weakened to allow more imports into Kenya for recycling, since China blocked the imports of US plastic waste. The cost to us of allowing these imports cannot be overstated. We risk reversing progress and hastening environmental degradation.

A number of US Congressmen and women in a bipartisan move wrote to President Trump opposing the use of the FTA to undermine Kenya’s efforts in the restriction of the use plastics. The Letter called on the US to uphold its obligation under the Basel Convention and cease the export of plastic waste to developing countries.

We are uncertain as to how it will all play out. However, we are certain that Kenya ought to ensure that, in negotiating with the US, it does not wholly reverse the progress it has made on protecting the environment.